Adam-12 had a baby (and named it McNulty)

Having heard of the show from the great Ludic Despair, the episode of Adam-12 that I randomly selected on Hulu did not disappoint. Because it lacks anything but the most tenuous and insubstantial narrative thread — a hokey gag about a joke the younger cop keeps trying to tell the older cop but continually being interrupted — it manages to be an almost completely naked and unmediated ideological fantasy. I find that delightful.

After all, most narratives are ideological, in the same way that most of us are gravitational: gravity and ideology are so fundamentally organic to the ways people and stories live that to talk about their absence would be to misunderstand something very basic to the reality being inhabited. Gravity doesn’t explain soccer, for example, but you’ll have trouble accounting for the World Cup without it. And by the same token, ideology explains very little on its own, but without thinking it through carefully, no explanation of how a story works could ever be sufficient.

Thus, if I may generalize, interesting stories worry the point where ideological desire meets the recalcitrance of material reality: what one would like reality to be runs aground against the way reality is, and the narratives that emerge will inevitably be some complicated mix of the two. Freudian theories of dreams, for example, allow us to think about the ways our desires run aground on our realities as a pre-condition for story-telling: to render Marx as a dream-interpreter, humans makes their own stories, but they do not make them as they please. The wishes we want to be fulfilled in stories and dreams are not the theoretical ideal-world best-case-scenario, but day to day desires which have been stifled in practice and find relief in narrative.

It also works as a practical fast-and-dirty way of thinking about ideological story-telling: if you push too hard on what you want reality to be, after all, you lose believability for those whose realities are different. But if you allow too much of the unsummarizable chaos of reality into the story –reality’s intransigence to what it should be — you lose the kind of narrative coherence that keeps a story alive. Which means, in the grand middle where readers and writers connect, you find all manner of stories which contain and make beautiful music out of their own contradictions and stress fractures, the ambiguity and ambivalence that narrative struggles to smooth out but which it can never really succeed in doing so.

Blah, blah, blah, to the point: Adam-12 is a special kind of narrative, for while there’s a loose story connecting the entire show together — an older cop plagued by the memory of losing his partner taking on and mentoring a younger cop — this is irrelevant, a remnant of the pilot which was necessary only to render plausible the show’s fantasy of homo-domestic violent surveillance. Which is the real point: to watch these this happy little brown-shirt robot family roam through the jungle of Los Angeles and impose random order on the chaos that modern society has become, etc. 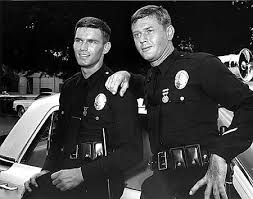 In some important ways, the pilot and the “average random show” are quite different from each other; the pilot has a shell of narrative coherence it hasn’t yet shuffled off. But let me define my terms: by homo-domestic I mean simply the show’s implicit gender narrative, by which older cop mothers the younger cop to render women unnecessary (“holding his hand” as it’s put in the pilot), until he develops into a sufficiently robotic replacement for daddy-mommy that daddy-mommy can retire or be gloriously shot in the line of duty or something. As the ultimate partnership, too, women-as-wives are a constant, threatening distraction, as inevitable as death in some sense, but about as welcome. There could never be anything sexual in the relationship between the two policemen, of course, but only because both are profoundly asexual, robot-men whose only desire is to extinguish any and all form of desire and whose only pleasure is the snuffing out of pleasure.

It is, in other words, a family narrative defined by the total elimination of family narrative. These cops have no home lives, because they have no homes (something the “day-in-the-life” framing constantly re-establishes by beginning at work and ending at work). And the only moments of physical intimacy that could ever exist for them are the — structurally quite important — changing-in-the-locker-room-with-a-bunch-of-cops scenes, of which there are many, and the family-dinner-at-the-diner-with-other-cops scenes, of which there are just as many. We never see them arrive or leave the police station — making it seem as if they live there — but this is a feature, not a bug, the point being that a good cop (and a good citizen) turns individual pleasure into socialized work (and the work of surveillance and disciplining a society plagued by the perversity of juissance).

This helps explain why every act performed in the line of duty is a home invasion of one sort or another , though of course part of it is simply the structural necessity of using cheap interior sets. But it nicely expresses the categorical hostility to the feminine that you find throughout the entirety of the show.[1] Women might be the means by which narrative continuity is maintained — each missions gets conveyed to the boys by a robotic and anonymous voice of a female operator, but this is both the exception and the rule. As purely functional, disembodied, servile, and absent, this operator is the perfect woman in a show that otherwise just straight up hates women. The older cop doesn’t quite hate the younger cop — his dismissive-ness of him hasn’t quite hardened into contempt — but just as you can tell the young cop is not-quite-a-man because he still has emotions and desires and stuff, you can tell that every woman in the show would probably be better off dead (except the paperwork would be a hassle), because of their wild unchecked irrational useless messy bodied-ness.

The first woman we see in the show‘s pilot, for example, is almost too perfect to be true: as our silent and implacable robocops roll up, we see her sort of wildly writhing around for no damn reason while two men fight nearby. It eventually turns out that she thought a salamander (her son’s pet) had escaped from its box, and the thought of it touching her drove her mad. As she proceeds to freak out — since a woman freaks out when a wet, fleshy thing escapes from its box, if you know what I mean (and you do) — two men passing by try to intervene: the first tries to treat the seizure he thinks she’s having, the second tries to save her from the rape he thinks is in progress, and so they end up fighting each other, demonstrating that violence is eros, and men fight men to get women. The whole hilarious crazy episode is, of course, easily and instantly resolved by the introduction of authoritarian joylessness: the cops are like “explain yourselves!” and when they do, all realize that there is nothing going on here, and they can all promptly proceed to go about their daily duties of making America great. Sex, they remember, is stupid and pointless and so, back to their joyless existences as laborers.

It’s all unbelievably stupid, so magnificently unencumbered by any insight into human sociology or psychology that the only response, really, is to stand and applaud. But it would be a mistake to think that this stupidity is incidental. It is as functional as the non-insight into humanity which Fred Clarke has been finding in the Left Behind series — here, for example — the total and complete captivity of an author to ideological fantasy that results in the most ridiculous things being rendered verisimilar. And it happens for exactly the same reason: if “reality” is — in the terms I was using above — the complexity of lived experience that eludes the simple narratives of our ideological desire, making a fantasy like the fifties “America” of TV shows like Adam-12 (or post-apocalyptic Christiandom of Left Behind) appear real not only requires all sorts of invasive reconstructive surgery, but requires those surgeries to be invisible even to the surgeon.

[1] To the extent that every cylindrical object is really a phallus, I have a simple rule for the American canon of reactionary cop narratives: women signify “domesticity” and domesticity signifies “woman.” And just as a shark that stops swimming dies, a cop that stops being pissed at the world for being womanish retires.