This Absence of Camels 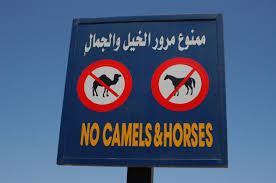 You know, for whatever reason, the biggest effect that Elif Batumen piece had on me was the desire to write a novel. Not sure that’s what she was going for, but it did suddenly make my non-MFA program status seem like a virtue. Anyway, if I ever do write a novel, I’m going to call it “This Absence of Camels.”

“Gibbon observes that in the Arabian book par excellence, in the Koran, there are no camels. If there were any doubt as to the authenticity of the Koran, this absence of camels would be sufficient to prove it is an Arabian work.”

I find that all kinds of awesome, but particularly so because I am informed that there are, in fact, camels in the Qu’ran. Human Province does the leg-work there. Perhaps Borges was just living up to his own maxim that “the original is unfaithful to the translation”?

In any case — beyond suggesting to me that we need to start circulating the meme that the presence of camels in the Qu’ran demonstrates its inauthenticity, and hope D’Souza picks it up next — that led me to try to find the passage Borges might have been reading in Gibbon. This seems to be it, a footnote that does not really at all say what Borges said it said:

“Mahomet himself, who was fond of milk, prefers the cow, and does not even mention the camel.”

For Further Discussion: What other books are proven to be the authentic word of God by the fact that they do not contain camels?

In the LRB, Elif Batuman is not a fan of program fiction:

Might the ideal of ‘creativity’, taken as a supremely valuable, supremely human faculty, be harmful to a writer’s formation? It seems ominous that the role of creativity in American education originates, as McGurl observes, in Cold War rhetoric: through creativity, America was going to prevail over its ‘relentlessly drab ideological competitor’ and ‘outdo the group-thinking Communist enemy’. The value placed on creativity and originality causes writers to hide their influences, to hide the fact that they have ever read any other books at all and, in many cases, to stop reading books altogether. One telling result of this value is a gap in quality between American literary fiction and non-fiction today. Many of the best journalistic and memoiristic essays in the world today are being written in America. I think of myself as someone who prefers novels and stories to non-fiction; yet, for human interest, skilful storytelling, humour, and insightful reflection on the historical moment, I find the average episode of This American Life to be 99 per cent more reliable than the average new American work of literary fiction. The juxtaposition of personal narrative with the facts of the world and the facts of literature – the real work of the novel – is taking place today largely in memoirs and essays. This is one of many brilliant observations in David Shields’s recent manifesto Reality Hunger, in which he argues that we had best give up the novel altogether. But I don’t think the novel is dead – or, more accurately, I don’t see why it has to be dead. It’s simply being produced under the kinds of mistaken assumption that we don’t make when it comes to non-fiction. Non-fiction is about some real thing in the world, some story that someone had to go out and pursue. It’s about real people and real books, which are, after all, also objects in the world. Why can’t the novel expand to include these things, which were once – in Don Quixote, for example – a part of its purview?

At his blog, Andrew Seal registers a dissent:

I don’t dissent from Batuman’s debunking because I resent the application of scholarship to literature or worry that it can impede enjoyment (anyone who has read this blog before should surely know I hold the diametrically opposite views in both cases). I dissent because the logic of Batuman’s formalism—if it’s been done before, it’s no longer revolutionary—doesn’t admit of the fact that literary texts interact with the times in which they are written and read, and their revolutionary quality or their hackneyedness isn’t a formal problem but a social one. We can only assess the “newness” of a technique within its social context because “newness” itself is produced by and through the society of any given moment. To fantasize otherwise is to abdicate any responsibility for accounting for why literature matters to people—something I would think the author of a book subtitled “Adventures with Russian Books and the People Who Read Them” might be concerned about.

For what it’s worth, I found the piece really smart and yet, for all its insight, weirdly uneven. Putting aside her strange tendency to reference a-literary tribespeople stereotypes as a meaningful conceptual tool — they’re not, actually — I have genuine questions about how carefully she read McGurl’s book; whereas Andrew read it scrupulously close, I have my own list of little “huh?” moments, and I didn’t even read The Program Era. When McGurl references the disappearance of the .400 hitter, he’s clearly referencing one of the central figures in Steven Jay Gould’s Full House, which Batuman either misreads for her own purposes or didn’t even recognize. For what it’s worth, the idea that the .400 hitter has disappeared because today’s hitters swing for the fences is one of the first things Gould demonstrates not to be the case. Ah, well…

Updated, 9/16: The Mumpsimus gets with the program.