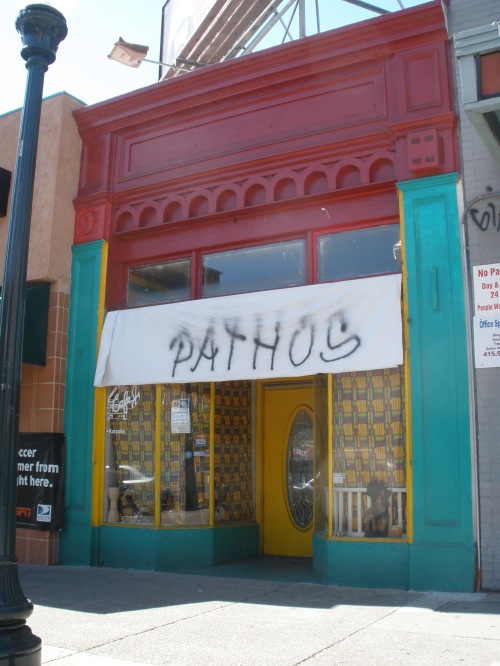 With Ghana’s loss, I find myself with no choice but to root for the Germans; as France was last time around, the Germans are more or less the team that most looks like the kinds of nationalism I find myself least uncomfortable with. So Cacau, Özil, Khedira, Boateng and victory! But really, it was watching them take Argentina apart like that. It was beautiful, and I want to see them keep playing like that, and if they do, they will win. So that means, I guess, that I’m rooting for them.

Anyway, along with that picture of the local Ghanaian restaurant, taken the afternoon after Suarez — the master of lies and deceit and the enemy of all that is good and holy — did what it is he did, I did find this piece at Minus the Shooting entertaining enough to pass along:

…tongue ever so slightly in Zizekian cheek, I would like to suggest that, in comparison to Diego Maradona’s ‘perverse’ Hand of God, Senor Suarez’s intervention was a far more radical and destabilising act. Maradona’s gesture was, properly speaking, ‘perverse’ in that it was a direct – obscene – transgression of the rules which effectively re-inforced the status of the law: after the event “Maradona” could indeed be accorded a simple, binary, symbolic significance – as hero or villain, redeemer or cheat – whose actions merely proved the necessity of regulation. He got away with it (much like every pilled-up hedonist “gets away with it” every weekend) and there was considerable collective jouissance to be had as a result (especially given the Falklands and all that). And what was it that he and his hombres were really glorifying in if not the perverse pleasure of successful naughtiness, the ‘obscene superego supplement’? His was an act of symbolic transgression; an attempt to prove that he was ‘above’ the law – thereby revealing his implicit reliance on the law as the constitutive ground for his own megalomaniacal ego – and one that the law, for its part, was quite happy to go along with, knowing its authority was in no real way being challenged.*

In contrast, the Suarez event is more radical, more real, more disturbing, for it all happened within – the gaze of – the law. The law was not transgressed, it was followed to the letter, and thereby its failure – its groundlessness and absurdity – was revealed, its ultimate impotence laid bare for all to see.** As an arbitrary and violent imposition of order onto contingency the law makes the game (all games) possible but we need to be reminded of its all too human origins, that it is not all-powerful (is ‘non-all’) and cannot legislate for all eventualities. This opens up the possibility of our taking some minimal distance from it, appreciating once more that we, and not the gods, are responsible for the law, and that, at the end of the day, while “you’ve gotta take each game as it comes”, you mustn’t let that blind you to the fact that it is a game and as such reliant on an ineliminable element of chance (not to mention violence – as many Ghana fans would no doubt testify today).

Ergo, the Good Soldier Suarez is a radical hero!